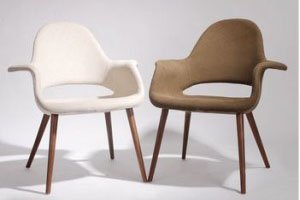 The Finish furniture designer and architect was born and bred with design, with both his mother and father having creative roles in the world. Eero Saarinen’s father Elie was a well-known architect, and his mother Loja was a textile designer and sculptor.

Eero was born on the 20th of August 1910 in Kirkkinummi, southern Finland, but soon moved to America in 1923. As a teenager in America, Eero spent his time with his father at the Cranbrook Academy of Art, where together they designed furniture and fixtures for the academy.

In 1929 Eero moved to Paris to study at the Académie de la Grande Chaumière, where after just one year he left to study at Yale. Eero studied architecture from 1930 to 1934, in New Haven, at Yale University. Following the completion of his studies, Eero moved back to America where he again spent time with his father and assisted at his architectural practice. During this time Eero also taught at the Cranbrook Academy of Art, where he met the fellow designer Charles Eames.

While he produced a small range of furnishings the quality of his work was highly regarded, with furniture like the Tulip and Womb chair being the most popular of his designs. Eero’s furniture consisted of soft curves and minimal or sleek chair legs, for which his inspiration came from the urge to “clear up the slum [sum] of legs”. This urge for slim furniture legs and soft designs is reflected in replica Eero chairs such as the Saarinen Chair and the Saarinen Executive Armless Chair. Eero’s minimalist approach to design is not only seen in his furnishings but also in his architectural projects.

Eero’s established career as a designer and architect ended on the 1st of September in 1961. At just 51 years of age he discovered a brain tumour that later took his life during an operation to remove it. Eero’s work lived on through his staff, Kevin Roche and John Dinkeloo, who finished Eero’s unfinished projects.

Eero Saarinen’s work was awarded even after his death in 1961 with the 1962 AIA gold metal. His work continues to be celebrated and recreated to this day with replica designer furniture accurately representing Eero’s love for soft shapes and organic designs. For those wanting to incorporate an Eero chair into their home, they can do so by accompanying the soft shape of the furniture with similar colours, textures and shapes seen throughout the room.