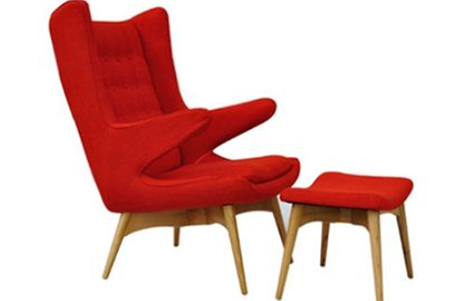 Born in Geelong in 1922 the Australian self-taught designer started his extensive, 30year, design career in the 1950s.
Following his military service during the early 1940s Grant returned to Victoria where he pursued his passion for design. Lacking financially, yet not creatively, the first and following chairs from the contour collection incorporated plywood and thin upholstery.
The contour collection was released in the 1950s and consisted of chairs, tables and storage furnishings, all created with the concept of ‘contour comfort’. The success of Grant’s designs led him to open the Featherston contract interiors furniture showroom in 1956. Grant’s design success also brought him job opportunities, and in 1957 he began working at Aristoc Industries. Over the 13year career with Aristoc industries Grant gained the position of design director.
In 1966 Grant started a creative and life-long partnership with his wife Mary.

Mary was born in London (Surrey) in 1943 and after 10 years, in 1953, Mary moved to Australia where she studied interior design, between 1960 and 1964, at the RMIT University in Melbourne. During this time in Melbourne Mary worked at a design studio Grant had established for Aristoc Industries.
Mary later married Grant and together, over the course of 30 years, they designed furnishings for Aristoc Industries, children’s products for the Children’s Museum of Victoria and even assisted in the design of their own home.

Grant’s death in 1995 led Mary to pursue her passions for creativity alone. Mary focused less on furniture and more on children, designing children’s products and educational spaces. Throughout the years the couples work was celebrated, with their work featured in multiple expos during the 1960s, and honoured as their names were inducted into the Design Institute of Australia Hall of Fame in 1996.