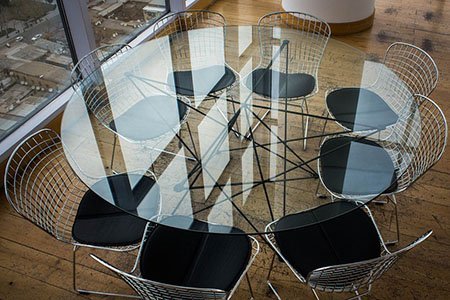 The Italian born Arri Bertoia moved to America in 1930, at the age of 15, it was this move to America that changed Arri’s name (from Arri to Harry) and his fate.

As a student Harry Bertoia began creating jewelry before experimenting with prints and monotypes. Harry’s experimentation lead to the creation and evaluation of 100 prints and resulted in 19 of the 100 being displayed in the Solomon Guggenheim Foundation, in 1943. In the following years Harry expanded his skills (learnt welding in Santa Monica) and contributed to war efforts by manufacturing airplane parts. Harry’s artistic passions were casually persuaded as he focused on his work for various companies involving human engineering and stroboscopic photography.

Harry continued to satisfy his artistic urges after-hours until 1950 when Knoll offered Harry the opportunity of a life time. Full creative freedom and recognition of his work was an offer Harry could not refuse, and he soon began working in an old building, provided by Knoll, in Bally. During his time spent working with Knoll, Harry designed multiple chairs and released the Bertoia chair collection in the 1950s. Harry later expanded his creative abilities by creating sculptures and architectural installations.

Harry Bertoia was indeed a brilliant artist, and this was not only recognised by Brian Lutz but also by the Lehigh University of Bethlehem who awarded Harry a honorary degree. The Muhlenberg College of Allentown also payed tribute to the artist, by awarding him a honorary doctorate degree in fine arts. Recognition was also seen in the form of awards, with Harry receiving multiple prestigious awards throughout his life.

Harry once said, “The urge for good design is like the urge to go on living” (McMahon & Hadfield 2017, p. 248) and this urge to design was seen throughout his life. Even after his cancer diagnosis, in 1976, Harry continued to create and design until his death in 1978. Harry Bertoia’s work is still seen to this day, with his sculptures displayed and furnishings commonly recreated. Replica Harry Bertoia furnishings are available from Chinese furniture suppliers, and their designs accurately recreate Harry’s artistic ability.

Iconic furnishings like the Bertoia Style Wire Diamond Chair contributed to the modern furniture movement (also known as Midcentury Modern). This movement and Harry’s designs incorporated line, shape and pattern. While Harry’s expertise was in chair designs, his tables and stools did not lack his signature style.

The simplicity in design makes replica Harry Bertoia furniture easy to include into a space, by accompanying the chair, table or stool with complementary colours and textures seen in the room.