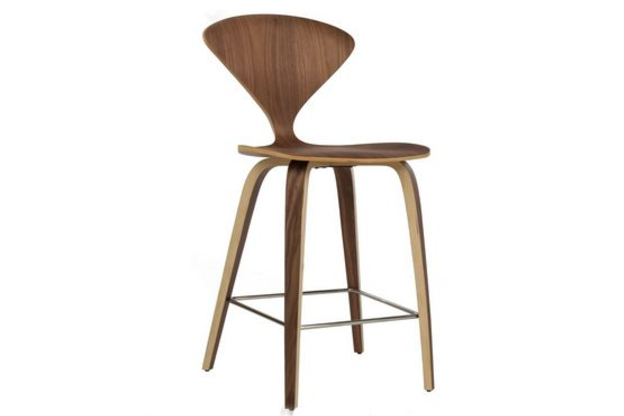 Brooklyn born Norman Cherner, spent his life learning, creating and teaching. His work included affordable yet stylish homes, furniture and ‘how to’ books.

The publication of books such as, How to build children’s toys and furniture (1954) and How to build a house for $6000, furniture fabricating houses from component parts (1957), gave Norman the opportunity to pass on his knowledge to the public.

Along with educating the public, Norman also taught students at the Colombia University where he had previously studied fine art. Norman’s knowledge in fine art led to his position as instructor at Museum of Modern Art, in New York, between 1947 and 1949. During this time Norman built and designed low-cost modular housing and affordable furnishings. His successful designs were used for a co-operative community in New York.

In 1952 a pretzel chair was designed by the Herman Miller Company and was later manufactured by the manufacturing company Plycraft. Production was soon stopped in 1957 after it was found that the chair was too fragile and expensive to produce.

The owner of Plycraft, Paul Goldman, hired Norman Cherner to do what Herman Miller failed to do, and Norman succeeded. Norman designed a durable, stylish and pretzel shaped chair. However, soon after Norman created the design he was told that production would not take place and that the project was scrapped.

However, Plycraft did not stop production of the chair, and it was later discovered that the company was producing Norman’s design under the name Bernardo. In 1961 Norman sued Plycraft and won the case and the rights to his work.

The production of Norman’s designs stopped in 1970 and Norman later died (at the age of 67) in 1987. For over 20 years the iconic Cherner designs became exclusive to collectors and galleries. However, in 1999 Norman Cherner’s sons opened the Cherner Chair Company to continue their father’s legacy.

Benjamin and Thomas Cherner released a range of chairs using the original drawings and designs created by their father. The Cherner Chair Company also created a range of new furnishings designed by Benjamin Cherner.

Replica designer chairs like the Norman Cherner Armchair capture the soft curves and bends in the wood that is seen in many of Norman Cherner’s original products. The use of the high gloss wood and the curved arms create a sense of luxury and comfort that is easily styled with cushions and throws.

Chinese manufactured furniture, like the Replica Wooden Norman Cherner Bar Stool, incorporates traditional elements with the use of moulded plywood and modern shapes. The modern style of the furniture makes it easy to incorporate into outdoor or indoor environments without the need to add decorator items, such as cushions and throws, to the bar stool.

previous
The Featherston's Designs
next
Designing and Styling the Dining Room